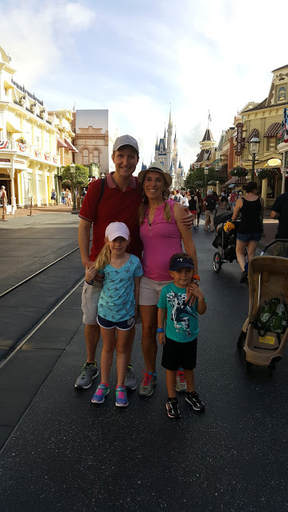 What influenced you to take over as lit mag advisor?
"Before I was the advisor, it was Mrs. Watts, but she ended up leaving.  Mrs. Ulrich and  Mr. Rawlin were looking for someone to replace her, and they knew they needed somebody who liked to do creative things,; someone who enjoyed seeing students pulling art and literature together. In fact, when Mrs. Watts had asked the students themselves who they’d like to see coming up, a lot of them who had me as a teacher said that they’d love to see someone like me! They knew that I would value the literature side as well as the art side of  a literary magazine; see the worth of both of those coming together. "

How do you channel your creativity personally?
"I grew up in a very creative family, so I think I’ve always been exposed to it; I've always had it around me. My mother is an artist, and my sister is an artist, and I always wrote. I have a twin sister, and she is like the art side of me.... Look how weird this is! Us twins together are like the MUSE. Whenever it came to assignments in school, I would always turn in the messiest, strangest assignment because my mother was an out-of-the-box type person. My mom actually never stuck to one job. She created her own pottery gallery, and then she got bored with that, and then she did weaving. The house we lived in was full of her paintings⁠— it's just who she is. I would always come with work that was just different because mom was always saying "No, no no! That’s too ordinary. That’s too plain!" and  she would push me to this abstract level. I think now, I see it in myself as a mom with Tessa, my younger daughter,  because she had a reflection project to do and I'd start saying “Oh, do this, do that!” and she'd tell me “Mom, this is not your project!” [laughs] ...she said it was almost too weird, too strange  ⁠— she wanted a project that was straight to the point. So, I think that creative side of mine has been nurtured by the experiences I’ve had. And when I look at the MUSE staff, I see that in you all as well. "

As a teenager were you involved with the arts at your school?
"That’s a great question! I mean, don’t you think that’s very prominent with you all as well? My high school years took place in South Africa, so it's a little different to what you guys have had. There was less of an emphasis on STEM. You guys have had such a push for science and mathematics here at Northview; that they’re the only way to success; that anything having to do with writing poetry ⁠—anything creative ⁠—are not worthwhile. I mean, I sat in a meeting one time where we ,as teachers, were talking about what we need to be doing in the classroom and it was all about literary analysis, so I asked, “Are we gonna do anything creative in there?” They said we don’t really have time for that! I said, “Well this is why students are having trouble writing college essays. We’re not investing time in creative writing skills. We’re not investing time in students investigating themselves.” Literary analysis teaches a very important skill of how to analyze and logically work through an argument, but it is not teaching students how to own themselves⁠— how to understand themselves. If we get more students exposed to the creative arts, such as being part of the MUSE, it would be very important. In my own life, my twin and I had more creative writing than I’ve taught here! I did poetry, prose, short-story writing; I didn’t just do lit analysis. Was I involved with the physical arts? No! [laughs] I couldn’t draw for my life! I didn’t take art; but my sister was an artist."